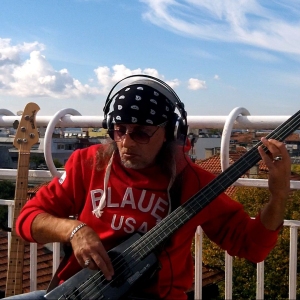 Flying in the face of persistent Soviet state control, throughout the late 80’s and early 90’s Mikheyev played in several underground bands, as well as joining Ermakov in punk rock band Panika, avant-garde jazz rock fusion outfit FoxBox and the eight-piece group Komnata 118. Mikheyev has recorded numerous songs and albums, both as a soloist and for the many groups with whom he has played including his own music project The CyBear. He joined MetaQuorum in 2014 playing bass and guitars on several tracks in Midnight Sun album and contributed compositions  and musicianship to the second album, Witchcraft Jazz.

In 1982 Mikheyev embarked on a long-standing collaboration with Lenfilm Studios as screen-writer, actor and deputy director. He currently lives in Bulgaria where he is active in the music and cinema scene.